How to implement custom pathfinding A* & CC in Unreal Engine 4

In this article, we see how our team implemented pathfinding in the Unreal Engine 4 for the upcoming tower defense game MassMonsterMaze. Besides using the default navigation meshes of the Unreal engine we implemented an A* algorithm in blueprints and a connected components (island detection) algorithm in C++. The hope is that the article gives a headstart to other game developers trying to implement pathfinding in their projects.

In our game, the users are free to place towers anywhere on the map instead of dedicated build spots picked by us. This allows users to build their own maze. But this creates a problem: what happens when a user tries to build in a spot that blocks the maze so enemy units no longer have a route to the next waypoint? By default, all enemies stop walking and the game is bugged:

There are different ways to solve it:

We decided to go for the last option since it is the most easiest to create and understand.

The initial solution was based on finding the shortest path with the A* search algorithm. Based on the distance between the begin point and endpoint you can calculate a score for a tile in a grid, recursively you can follow the best scoring tile which mathematically will give you the path in the shortest number of tries and preventing the algorithm from having to calculate the score for every tile in the grid. The video below gives a good visual introduction:

The main workflow of this project is to create everything in blueprints until we hit performance issues. Then we convert a working solution to C++ code to optimize for performance. The A* algorithm has not been converted to C++ yet because of the alternative solution of connected components.

Before we can do any work on the custom pathfinding logic we first have to convert the Unreal map to a grid. Our towers currently all have an equal size of 100 x 100 Unreal units. All maps have a single navigation mesh bounds volume which enemies use for the pathfinding. We will not alter this pathfinding because it is already very performant. However, we can reuse the size of the navmesh to calculate a custom grid.

Now that we have a strategy, we should think about where to put this logic. We decided on a custom actor component (CustomAIComponent) and add it to the player controller when we initiate a game. This ensures that we can both use it at the client and at the server which is important because we have a multiplayer game.

Great, with the component in place we can do some work! First, let’s calculate or grid size based on the Nav Mesh Bound in the map. GetActorBounds returns half the size of the navmesh so we have to multiply it by 2. The GridItemSize is set the 100, the size of the towers:

Now that we have the dimensions we can fill the grid with tiles based on the grid width and length. We create an array of GridStructures. The CheckBlockedGridItem uses a line trace to determine if enemy units can walk on the tile. We also set the start and endpoint in the grid based on another actors location and we set the neighbour tiles (used later in the pathfinding).

Phooey! That’s a lot of preparation and we did not even show half of the code (but we did show the most important parts). But, now that we have the grid we can start with working on the pathfinding!

When a path is found you can find it by starting at the endpoint and following the parent indexes until you find the starting point.

So, let’s take a look at how it works in blueprints! Use control + scroll to zoom in and out.

Amazing! With the path, we can now display the path ingame and make sure the player can not block the enemy units. We do this by setting the tile we want to build to blocked (not canWalk) and then run the a* algorithm.

But there is one small problem..

The performance was great when the maze was small and when you start to check at the beginning of your maze. But when the maze became longer and longer the performance dropped to an unplayable level. Furthermore, when you blocked the maze at the endpoint it even crashed! The explanation is easy. When a path can not be found it has to do the calculation for every tile in the grid it can reach. One way to make it more performant is to write it in c++ code. However, from searching performance reasons I found this advice by amitp:

3. If the end node being blocked is a common problem, connected components (“island id”) is extremely simple and fast to implement. You preprocess the map once. Loop over each node. If it already has an island id, then skip it. If it does not have one, run breadth or depth first search from that node, and mark all visited nodes with the new island id. When you run A* you will first compare island ids. If they are different, you will know right away that there is no path. (Note: this only is useful if all edges are two-way. One-way edges complicate this.)

So the idea is that we can improve the A* performance by first running a simpler algorithm that checks if the path can be reached at all. Furthermore, this is enough to satisfy our use case to make sure the towers cannot block the path. So let’s work on the implementation! However, I learned my lesson of blueprint performance for pathfinding algorithms and started to build this in c++. Luckily, we can reuse all of the grid logic in Blueprints when using the new C++ class as the parent for the CustomAIComponent.

This algorithm is much simpler! Let’s take a look at the code:

First, we have to add the structure to the c++ class instead of blueprints in the .h file (Adding the USTRUCT and UPROPERTY allows blueprints to set these values so all of our code still works!):

Then, the logic starts with some initialization of the code grid:

Then, there is a recursive function

This logic is very simple and fast! All the performance issues have been solved by just using the connected components algorithm in c++ instead of the more complicated a* algorithm.

Now, you should have a better understanding of what it takes to build a custom pathfinding solution in the Unreal engine. We still plan to use the a* logic and probably refactor it to c++ but with connected components, we can solve all of the high priority use cases with no performance penalty. For example, to display the path is more a nice to have than a critical feature.

Nice article! I’m really trying to wrap my head around what you’re doing here. The blueprints seem fragmented so it’s hard to understand where these functions live. All they all in a main blueprint? (player controller?) Would you be able to show how you did things like the line trace to see if any thing is blocking the AI’s path?

Thanks! I created a custom actor component where most of the logic lives and couple it to the player controllers. When the player tries to build a tower the pathfinding check is executed. However, the initialization of the grids happens only at the construct.

The basic logic of the line trace is to derive the absolute position of the navigation mesh from the grid positions.
https://www.nielsvandermolen.com/wp-content/uploads/2019/08/grixXY.png

Then we can do a line trace (on the middle of the grid item) like so:
https://www.nielsvandermolen.com/wp-content/uploads/2019/08/linetrace.png 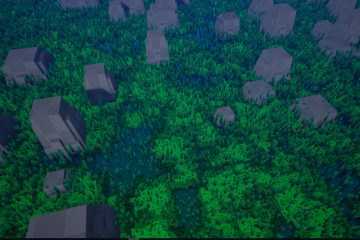 A co-op tower defense game on the Unreal Engine – intro

As lifelong video game enthusiasts, a friend and I decided to build a tower defense game together. I have some previous experience in an internship building games for the Nintendo DS and he (Sander Vereecken) Read more…