A continuous integration pipeline with Jenkins in Docker

This article should be useful for people that want to build their continuous integration system with Jenkins or those who are evaluating the option. We show in an example of a Jenkinsfile where we build a Symfony application with Composer, execute PHPUnit tests and how we pushed the Docker images to a custom repository. Furthermore, we show how we execute the pipeline on a Docker Swarm cluster with a custom Jenkins agent. The reason for writing this article is because I had a hard time to find this sort of documentation on the web and I think it can benefit some people. As it is not an introductory article, it is not useful for everyone.

There have been many strong alternatives for Jenkins that developed in the last period that outsources your build pipeline. Travis CI, Shippable, and CircleCI seem to be the biggest players. As they offered a better user experience, many projects outsourced their continuous integration builds to one of these platforms.

The main benefits compared to Jenkins were these:

Where is Jenkins now

The Jenkins project did catch up to the platforms with making Pipelines a first-class citizen in Jenkins and the introduction of a Jenkinsfile. When there is already in-house knowledge available on how to set up your infrastructure it makes sense to set-up your continuous integration in Jenkins. The main benefits are:

However, with Jenkins, there are still maintenance and set-up costs, but when you are running a Docker Swarm, these costs are worth the flexibility you gain. In the rest of this article, we try to reduce the costs even further by showing how our build works and the lessons learned by building it.

This is an example of a Jenkinsfile used for a project with a similar structure of the Symfony API Platform application:

We first build the project with Composer:

When the Composer build is successful, the ./project/ folder should contain the production code. Then we can build the Docker image for production, which does not need Composer, with:

In the Dockerfile-php-production file we copy the code of the /project folder:

The results are Docker images for a custom Docker repository tagged with the Git commit hash.

When the build stage is successful the test stage start. Here we will execute the PHPUnit tests:

We do need Composer in the PHP-FPM container to install PHPUnit. Furthermore, we do need a database for the functional tests. Here is the test.yml file:

Make sure that the correct database connection is put in the .env.dist file:

When the containers are running we will execute this script in the fpm container which should run the tests:

Now that the tests passed we can push the Docker images (deployable artifacts) to the Docker repository. We only do so when we are at the master branch. Note, this condition only works in this way when you use a “Multibranch Pipeline” job in Jenkins. We tag the Docker images with the APP version specified in the environment section. Furthermore, we add the latest tag to the images. We do not rebuild the images in this stage but use the images build in the build stage.

Discussion about the build

That is how far our build has developed for now. Now, with the Docker images pushed it should be easy to deploy or update a new environment with the new versions. Furthermore, this should give us a good base for automated deployments and more extensive integration and performance tests. The rest of the article is about how we set-up the Jenkins environment in Docker Swarm, which is probably not interesting for people that do not (want to) work with Jenkins in Docker.

Installing Jenkins in a Docker Swarm

It is easy to install the Jenkins server with Docker, but it is more difficult to set up the Jenkins build agents (or slaves). Which is an important step because of that the Jenkins architecture expect agents to execute the build. You can execute builds on the main server, but it is not the recommended option.

We make use of the Jenkins Swarm Plugin. It is good to note that this uses a different Jenkins client than the official Jenkins slave image that it on the Docker Hub. Therefore, we can not reuse that image.

This set-up works with a Docker Swarm cluster, but it should be fairly easy to make this work with Docker Compose. For example, only Docker services have support for Docker secrets. The jenkins.yml file below is the set-up for our containers which we deploy on our Docker Swarm cluster:

The Dockerfile for the Jenkins agent:

When the Docker container is created it will run the following script that will start the java process:

We connect the Jenkins agent with the Jenkins server by using a username and password of a Jenkins user. This method differs from how other Jenkins slave connects. In order to make it secure we have to utilize Docker secrets. You can create a secret by going on the Docker swarm and executing:

Then the secret should be stored in /run/secrets/jenkins-password if you deploy the stack in the jenkins.yml file: 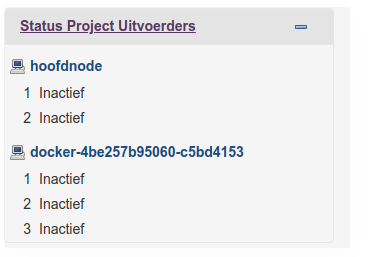 Now, the Jenkins should be ready to execute the build. You can create a Multibranch pipeline job and connect it to the Git repository and the Jenkinsfile. You can add some automatic triggers (e.g., when pushed to Bitbucket or periodically) or trigger the build manually.

You have seen how to set-up your own Jenkins continuous integration pipeline for a Symfony application. It should now be easy to add a Jenkinsfile to your repository and create a new build on your Docker Swarm cluster. We used a Symfony example as the example, but you should be able to use this knowledge any other technology stack which you can build and test automatically. This article touched many concepts but it was not comprehensive, we did not discuss how you can set-up your Docker repository or connect to the Jenkins server with a proxy. If there is a need for such articles, please let me know.

Buy me a coffee

Well, at real world, we need to set composer to use cache, instead of download all dependencies over and over again. How do you manage this?

The normal composer workflow is to commit the composer.lock file. Which should contain all download locations making the install command quite fast. However, if you do want to use the Composer cache system you could try creating a Docker volume out of the cache directory. Never done this before but it seems to be in ~/.composer/cache